Reduce Diacetyl production during fermentation or dry hopping with ALDC from CellarScience. ALDC, or alpha acetolactate decarboxylase, is a helpful enzyme that can be added at yeast pitching or along with your dry hops to limit the production of Diacetyl to protect your finished beer from off-flavors and reduce the conditioning time needed before its ready to bottle or keg. Commonly used to combat hop creep, the result of dry hops with trace amounts of sugar leading to additional fermentation activity, resulting in more Diacetyl production and requiring more conditioning time.

Use:
Available in 1 oz dropper bottle or 8 oz bettix bottle. Add to fermenter at time of yeast pitching or dry hopping at a rate of 1 dropper full per 5 gallons or 3 mL per bbl. 1 oz contains approximately 35 doses for 5-gallon batches, or enough to treat approximately 10 bbls.

Although commonly added to heavily dry hopped beers, using ALDC during fermentation can benefit any beer style by reducing Diacetyl production. Brewing hops all contain the naturally occurring enzyme AMG or amyloglucosidase which breaks down long chain sugars into simple sugars that yeast can ferment. The reason hop creep is a relatively new phenomenon is due to the changing ways in which hops are dried and processed. As brewers started to demand more aromatics from their hops, growers began to lower the kilning temperatures to preserve volatile oils. This led to higher levels of AMG left on the hops as well, where they were previously denatured at the higher kilning temperatures. With more AMG present on the hops, dry hopping now leads to more fermentation activity and higher levels of Diacetyl produced after the primary fermentation is complete. Although the simplest remedy to hop creep is time—waiting for the yeast to naturally clean up the extra Diacetyl—ALDC is a great way to reduce conditioning time and the risk of off-flavors in your finished beer.

The recommended shelf life is 12 months from the date the package is opened. 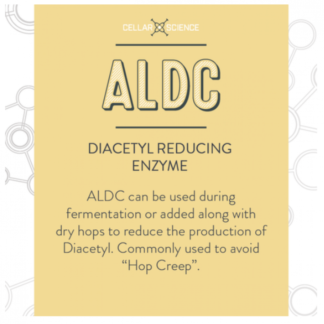